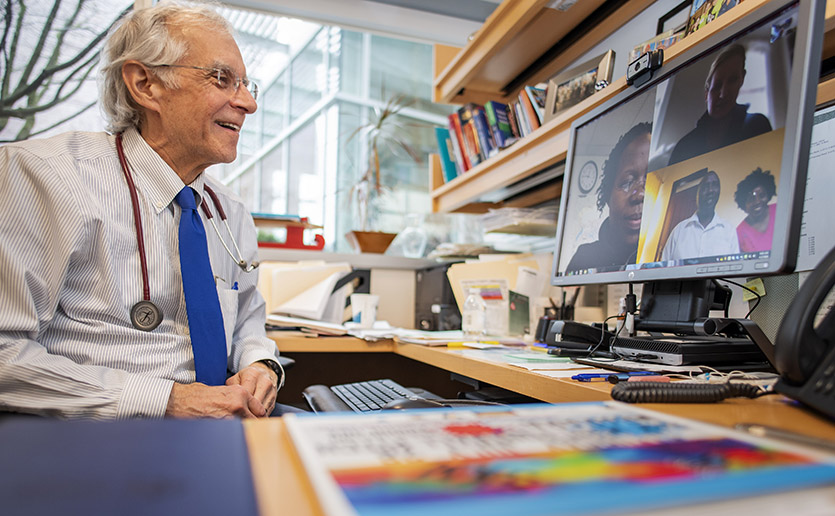 Howard Weinstein, MD, and other pediatric cancer experts at Mass General, are regularly in touch with colleagues at the Mbarara Regional Referral Hospital as part of a partnership designed to bolster pediatric cancer care in southwestern Uganda.

A pediatric cancer effort overseen by the Mass General Center for Global Health is making a difference in the lives of families and children.

Howard Weinstein, MD, and other pediatric cancer experts at Mass General, are regularly in touch with colleagues at the Mbarara Regional Referral Hospital as part of a partnership designed to bolster pediatric cancer care in southwestern Uganda.

“The prognosis for cancer should not be based on where you live,” says Howard Weinstein, MD.

“The prognosis for cancer should not be based on where you live,” says Howard Weinstein, MD, who has been chief of Hematology-Oncology at MassGeneral Hospital for Children (MGHfC) for more than 20 years.

“We honestly do not know how much cancer we have in Southwest Uganda because we believe that most children die in their community before they are diagnosed,” Barnabas Atwiine, MB ChB, MMed., says. “We believe that we see a small fraction of the children with cancer.”

Dr. Atwiine, who recently completed a pediatric hematology-oncology fellowship at the Ugandan Cancer Institute, leads the pediatric oncology program at Mbarara Regional Referral Hospital (MRRH), a partner of the Mass General Center for Global Health. He is one of 17 pediatric oncologists in the country of over 44 million, and the only one practicing in Uganda’s Southwest Region.

Dr. Atwiine hopes the success Uganda has seen in HIV outcomes can be replicated in childhood cancer given proper resources. Mass General is working with Dr. Atwiine and MRRH to achieve this goal.

Dr. Weinstein, from MGHfC, has been instrumental in the growth of the Mbarara program. When he first visited in 2015, MRRH was in the early stages of developing the pediatric oncology program. Children with cancer were treated in the general pediatric ward, often sharing space with patients with infectious diseases. “Our initial goal was to try to create a better environment, a clinic and a ward that would really be separate from the general ward,” Dr. Weinstein says.

Around this time, Wellesley, Massachusetts teenager James Mooney visited MRRH with his parents, Lisa and Jim, who had supported projects at the Ugandan hospital through the Mass General Center for Global Health. James was so moved by the visit that he started the 5K Uganda Color Run for Cancer, an annual fundraiser that has “changed the whole face of pediatric cancer at this institution,” according to Dr. Atwiine.

Now in its fifth year, the run has raised funds which have been used to hire nurses, build a beautiful new pediatric oncology ward and purchase medication.

“The color run is really a very creative way to bring awareness to the community about pediatric cancer,” says Dr. Weinstein, a two-time participant.

Dr. Atwiine was a pediatrician at MRRH who had always been interested in hematology and oncology. When the Uganda Cancer Institute created the pediatric hematology-oncology fellowship program in 2016, he applied and was accepted. Upon completion, he returned to MRRH to run the pediatric oncology program.

“Dr. Atwiine has been a real leader in bringing together a team that can care for children with cancer,” Dr. Weinstein says.

“Each day we learn something new,” Imelda Busingye, RN, an MRRH pediatric oncology nurse says of working with Dr. Atwiine. “During the ward rounds he has taken an extra effort when seeing patients to teach us.”

Ms. Busingye also credits the MGH Global Nursing Fellowship, which has sent Mass General nurses to MRRH to work with their Ugandan counterparts, with helping her feel comfortable working in the pediatric oncology unit.

Dr. Weinstein and other Mass General colleagues provide frequent support for their Ugandan colleagues both during visits and remotely. Tumor boards and biweekly video conference calls allow for discussion about new cases, operational needs and other issues.

“Our patients can’t pay us and we never ask them to, so philanthropy really allows us the freedom to focus on the care of the patient.”

“This partnership is really enriching to Mass General and together we believe that we are making a real difference in the lives of children and their families,” say Louise Ivers, MD, MPH, DTM&H, executive director of Mass General Center for Global Health, which oversees the partnership.

Despite having the key elements of a successful department in place, the Mbarara program still needs support. “Philanthropy remains a real key as far as making any headway going forward,” Dr. Weinstein says.

Dr. Ivers echoes this fact. “Our patients can’t pay us and we never ask them to, so philanthropy really allows us the freedom to focus on the care of the patient.”

To make a donation to the 5K Uganda Color Run for Cancer, please visit its website.

This story was first published on the Mass General Center for Global Health’s website.

Support the Center for Global Health