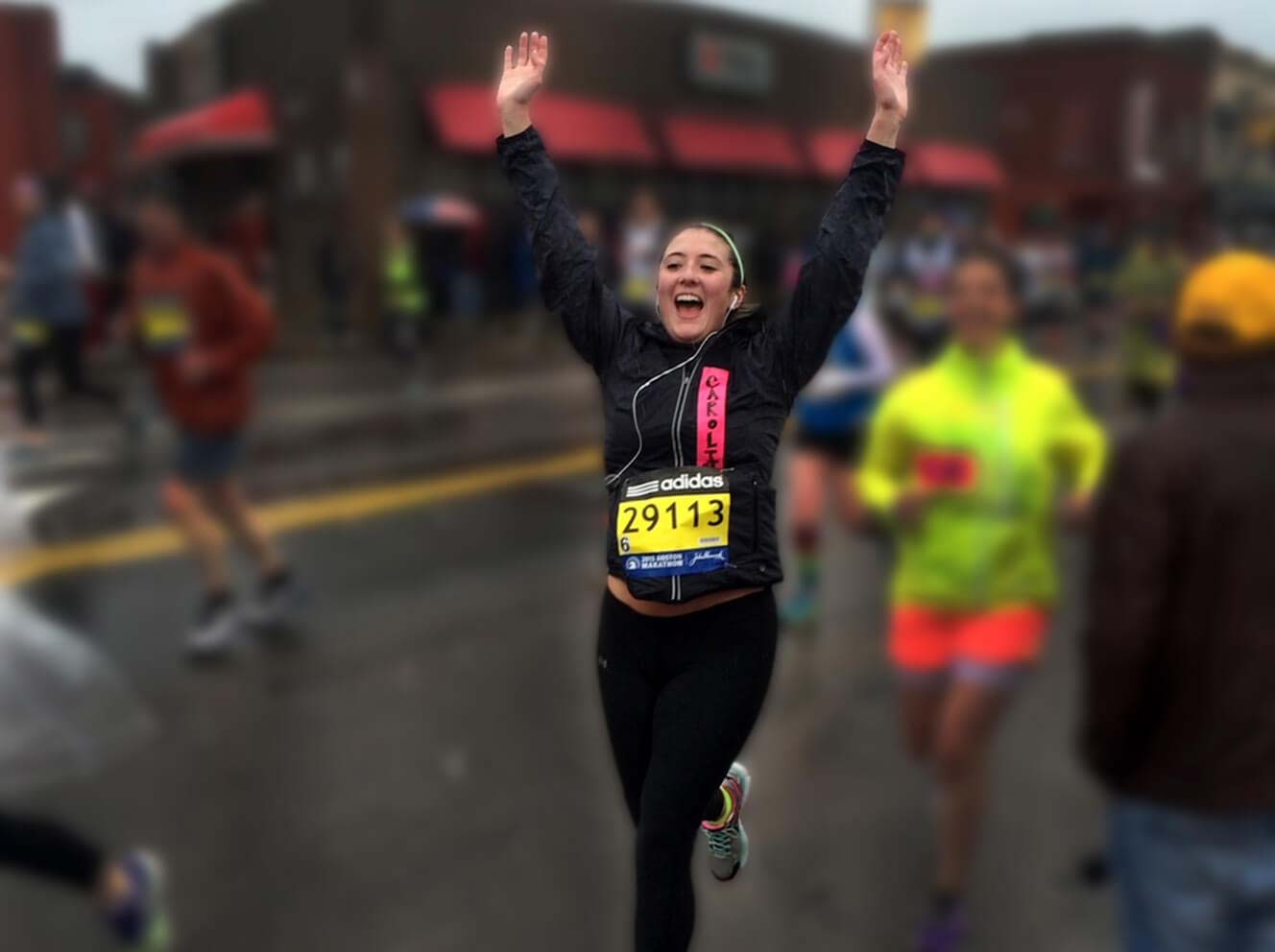 By raising money for cancer research, four runners will honor Caroline Pinette, RN, a critical care nurse at Mass General who was determined to help others to the end.

Caroline Pinette, RN, was a critical care nurse on the burn unit at Massachusetts General Hospital — a job that required grit, compassion and inner strength. She needed each of those qualities when a CT scan revealed a tumor the size of a football in her abdomen. She was just 24 years old.

In July 2016, Caroline had surgery to remove the tumor that August. But by April, the cancer was back — and it had spread to her lungs and liver. She died in May 2021 after a five-year battle with adrenal cancer.

“She was an amazing nurse; so caring and honest,” says McKinley. “She was also very funny — blunt but hilarious. She had the best one-liners.”

“The first time she ran the Boston Marathon was in 2013 and she was stopped at mile 22 when the bombs went off. So she ran it again in 2015 and finished,” says Kathleen. “She was diagnosed a year later.”

Her sister and friends agreed that Caroline refused to let cancer define her.

“She was fiercely independent and handled everything that was thrown at her with grace and strength,” says Kathleen. “We never talked about whether she was scared. She didn’t want to go there; she was determined to stay in the present.”

But for Kathleen, who describes herself as “the emotional one” of the two sisters, the reality of what Caroline faced was inescapable. The adrenal glands, which sit atop the kidneys, help control nearly every vital organ in the body. When disrupted by cancer, they can produce severe hormone imbalances that cause diabetes, heart problems, mood changes, and more. It is also an extremely rare form of cancer that typically occurs either in pre-school children or mid-aged adults. Caroline was an exception.

“We always knew she was one in a million, but we never thought it would be in this way,” says Kathleen.

Over the next five years, Caroline tried every treatment option — chemotherapy, radiation, immunotherapy — and through all of it, she continued to work on the burn unit.

“The stories she would tell … It takes a special kind of person to do that kind of work,” says Kathleen.

Caroline was, indeed, a special kind of person, according to McKinley, her nursing colleague at Mass General.

“Sometimes while working, she’d leave her phone at the nurses station and her blood sugar alarm would go off,” says McKinley, referring to Caroline’s diabetes-like symptoms caused by adrenal cancer. “We’d find her taking care of other people in intensive care and she’d often refuse to leave them to grab a snack. Even during the pandemic, she worked until she absolutely couldn’t work anymore. It was brave and stubborn at the same time.”

Kathleen describes her sister as a fighter who refused to give in to her disease or acknowledge the nearly inevitable outcome.

“She lived her life as much as she could, given the lousy hand she was dealt,” says Kathleen. “The week before she died, I accompanied her to her best friend’s bachelorette party. That shows you her level of determination.”

Kathleen was deeply impressed with the care provided by her sister’s medical team at Mass General, which included her oncologist Philip Saylor, MD, her nurse, Erika Meneely, NP, and her primary care physician, Aaron Hoffman, DO, MPH.

“They literally became part of our family,” says Kathleen. “Whenever we had to rush my sister to the emergency room, Dr. Hoffman was always in her room within an hour. Erika treated Caroline as if she were her daughter; and both she and Dr. Hoffman were at our house the night she died. Dr. Saylor and Erika were at the wake. I’ve never heard of anything like that.”

Caroline’s passing was a devastating day for everyone who knew and loved her, but it was also serendipitous. The two sisters had always wanted a dog, so in Caroline’s final weeks, their father agreed to add a dog to their family. Kathleen made arrangements for them to choose a pup from a pregnant dog’s unborn litter.

“Our pup, Ruby, was born the morning after Caroline passed away,” says Kathleen. “It was as if one soul left this world and another arrived.”

Kathleen Pinette has reached her marathon fundraising goal, but to support the efforts of team members Justine Carlson, her cousin Katelynn Bromwell or Caroline’s co-worker on the burn unit, McKinley Gray, RN, please click on their names to make your gift.