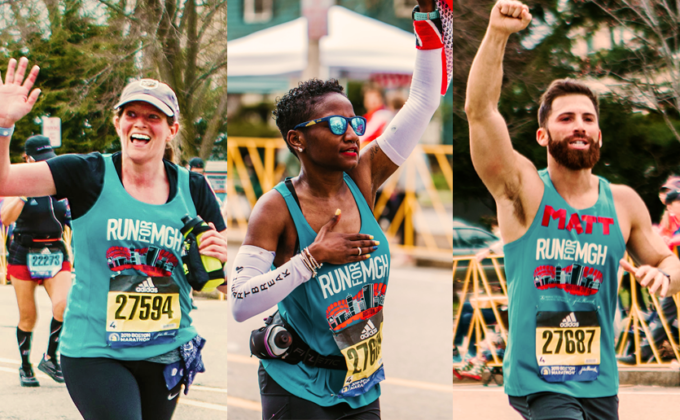 Their personal causes helped Mass General’s Boston Marathon® runners make it through rain and pain to the finish line.

On April 15, 2019, more than 190 runners on this year’s Mass General Marathon Team “did Boston,” pushing their limits to cross the finish line of Boston’s prestigious 26.2-mile race.

As of last count, those determined runners had cumulatively raised more than $2 million.

“It was all worth it when I turned onto Boylston Street and heard the roar of the crowd cheering me on to the finish line.”

Through an ongoing partnership with John Hancock, Mass General is able to field 160 runners on teams for three signature causes: the Pediatric Cancer Team, in existence for 22 years; the Emergency Response Team, created in the wake of the 2013 Boston Marathon® bombings; and the new Home Base Team, which supports clinical and support services for veterans and military families impacted by the invisible wounds of war, such as post-traumatic stress and traumatic brain injury.

An additional 32 runners ran for other Mass General programs: the Lurie Center for Autism, Cystic Fibrosis, Caring For a Cure, Down Syndrome Program, the molecular biology research of Vamsi Mootha, MD, the Head and Neck Cancer Center, the Fertility Center and for Innovation in Breast Cancer Treatment.

Each runner had their personal reasons for devoting countless hours to training and fundraising.

Nicknamed “Hotfoot” as a child because she never stood still, Abeo Powder fulfilled a childhood dream to run the Boston Marathon®. She shares her love of running with her father, who used to join her to watch the Boston Marathon® at the same spot near the finish line every year. That spot was where a bomb went off the one year they missed the marathon because she was away at school.

“Ever since, I became more determined than ever to run my hometown race and to do it for a cause that means so much to me,” says Abeo.

Inspired by Rylee, a fifth-grader who has been in cancer treatment for the past couple of years, and Saul, a young Mass General patient with cancer, she exceeded her fundraising goal of $10,000 for Mass General’s Pediatric Cancer program.

Although her father couldn’t be there to cheer her on—he recently started cancer radiation treatment at Mass General, “It was everything I imagined and more,” she says.

For Shira Brown, running for Home Base was nothing new. Since 2009 she has supported the program through her participation in the Run to Home Base charity race at Fenway. “Thanks to Home Base, running has become an integral part of who I am,” she says. “I didn’t serve in the military but realized that this was a way I could be of service to those who did.”

Running his first marathon is the second hardest thing Matt Danto says he ever did in his life. The hardest was recovering from substance use disorder.

A math teacher and golf coach in New Jersey, Shira ran some painful miles with unexpected muscle cramps in her leg. “But it was all worth it,” she says, “when I turned the corner onto Boylston Street and heard the roar of the crowd cheering me on to the finish line.”

Matthew Danto, who ran for the Emergency Response Team, said running his first marathon was the second hardest thing he ever did in his life. The hardest was recovering from substance use disorder.

The Mass General Emergency Response program is a cause close to Matt’s heart. When he was in the throes of addiction, he was helped multiple times by first responders. In fact, he likens running the race to the recovery process.

“You start out feeling good, then it starts getting difficult,” he explains. “But whether it was recovery from addiction or finishing the race, the cheering crowds and support of family and friends got me through it.”

Asked if he would repeat his grueling training regimen and run the Boston Marathon® again, he responds without hesitation: “Absolutely.”

Peter L. Slavin, MD, president of Massachusetts General Hospital, expressed his thanks to the 2019 Boston Marathon® teams: “Each of our runners spent countless hours training and fundraising for Mass General. On behalf of our community, I salute and thank these individuals who dedicated so much of themselves to support our efforts to improve the health of others.”

To learn more about the Mass General Marathon Program, please contact us.