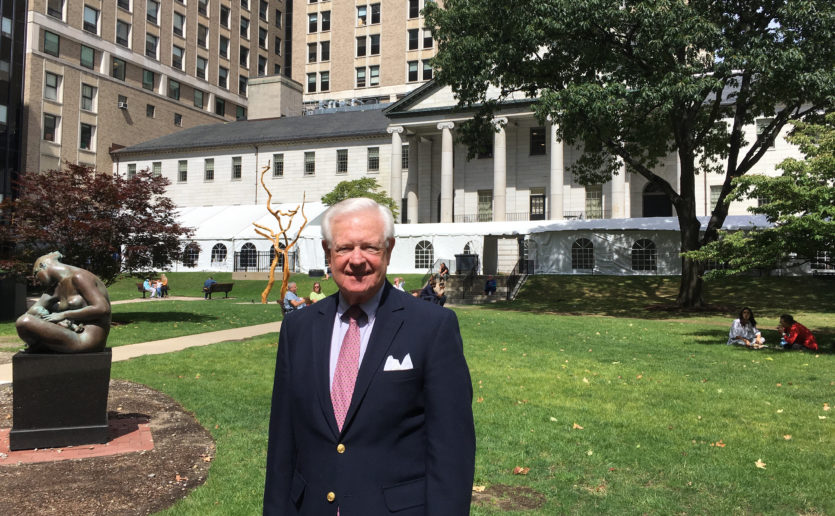 Hugh Barry worked with staff in the Office of Planned Giving and his tax counsel to create an estate plan that would benefit Mass General.

Hugh Barry says the coordinated care at Mass General inspired his creative philanthropy and lifelong commitment to the hospital.

Hugh Barry worked with staff in the Office of Planned Giving and his tax counsel to create an estate plan that would benefit Mass General.

In 1996, Eric M. Isselbacher, MD, expertly diagnosed and successfully treated Hugh Barry, formerly of Easton, Connecticut, for a cardiac issue. Since then, Hugh’s appreciation and respect has grown not only for Dr. Isselbacher and his team at the Corrigan Minehan Heart Center but for the entirety of Massachusetts General Hospital. It’s reflected in his ongoing philanthropy and advocacy for the hospital.

“It’s really the coordinated care at Mass General, and not just the lead doctor, that makes the difference in patient outcome and satisfaction.”

“Doctors like Eric Isselbacher are a wonderful testimony to the institution,” says Hugh, who now resides with his wife, Elaine, in Kings Park, New York. “They’re the first point of contact somebody has with the hospital and that can make a big difference.”

That’s why Hugh gives both to cardiac research and, monthly, to the MGH Fund for the hospital’s immediate opportunities.

“Dr. Isselbacher is leader of a larger team,” Hugh says. “It’s really the coordinated care at Mass General, and not just the lead doctor, that makes the difference in patient outcome and satisfaction.”

His philanthropy to Dr. Isselbacher’s thoracic aortic research is financially sound. It starts with a charitable gift annuity which makes regular, fixed payments to Hugh in exchange for shares of stock he contributed to the hospital in 2007. That year, Hugh retired from PricewaterhouseCoopers LLP, in New York, and faced a potentially large income tax liability.

The charitable deduction from his gift annuity helped. And because the stock he donated had appreciated in value over time, he also avoided federal and state capital gain taxes. “So it was a ‘win-win’ for both Mass General and for me,” he says.

Encouraged by conversations with the Mass General development staff, Hugh then chose to support the MGH Fund. It is the hospital’s primary source of flexible funding for Mass General President Peter Slavin, MD, to rapidly deploy investment toward areas of the greatest need and opportunity. Each year, Hugh divides his donation into 12 monthly automatic payments on his credit card. These contributions make Hugh a perennial member of The 1811 Society.

A Community for Good

“Mass General has a good way of staying in touch with people,” Hugh says, citing invitations to special events like The 1811 Society’s annual symposium and MGH Fund lecture. “The programs invariably have interesting, recognized speakers and engaging social events where you interact with the leadership of Mass General as well as other hospital supporters.”

Hugh worked with staff in the Office of Planned Giving and his tax counsel to develop a charitable bequest in his estate plans. The bequest language is drafted to maximize its impact where he wants it – to Dr. Isselbacher and the Corrigan Minehan Heart Center.

This future gift confirms Mass General’s place as Hugh’s preferred charitable entity. “I’ve realized the value of ‘centers of excellence,’ institutions, such as Mass General, and the superior patient care they provide,” he says.

Are you ready to explore creative ways to give? Call the Office of Planned Giving at 617-643-2220 or email us at mghdevpg@partners.org to find out about all your options.