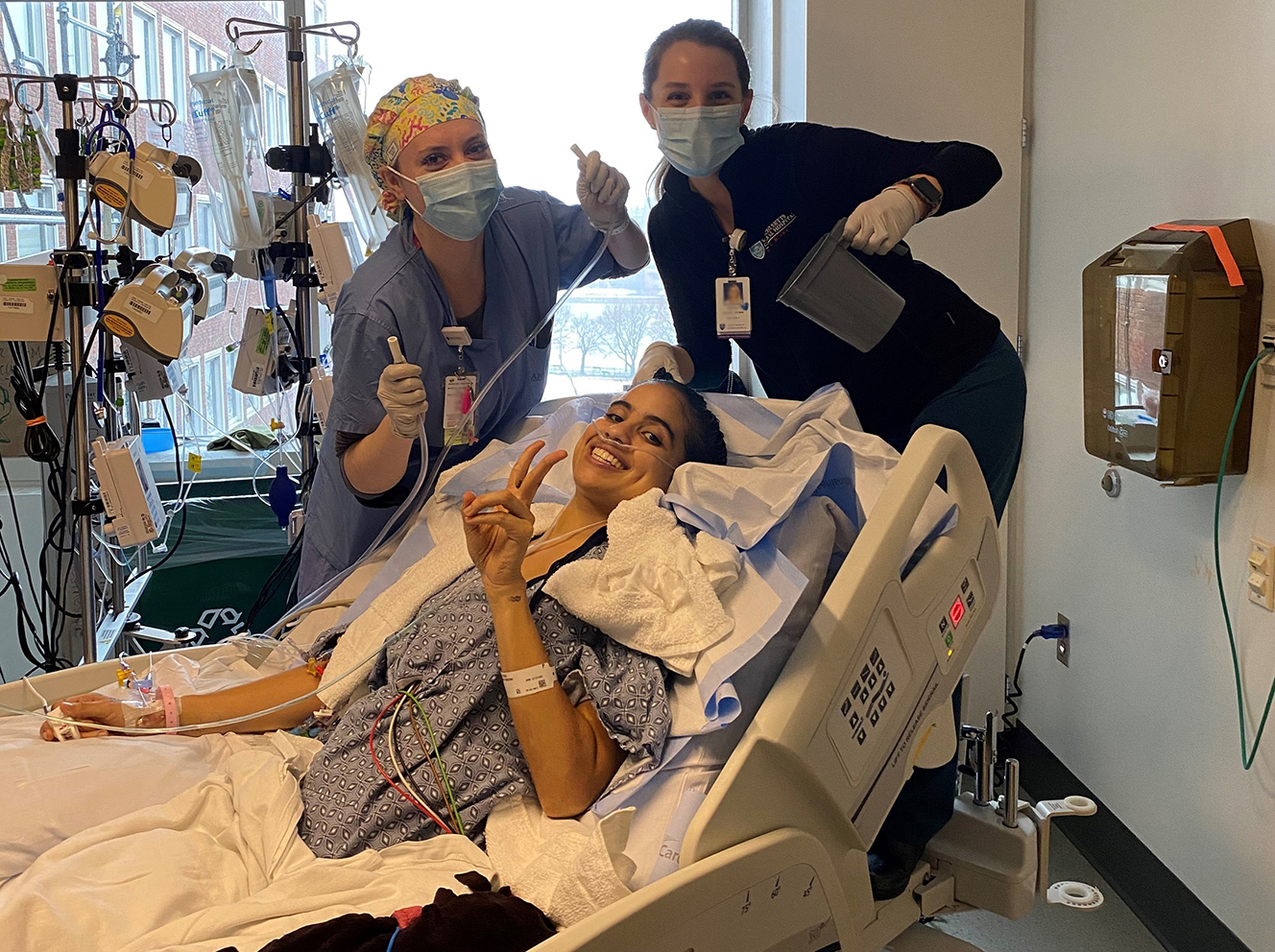 A Breath of Fresh Air

A young, athletic woman has her breath taken away — literally — only to find a new lease on life with new lungs.

Ella Wechsler-Matthaei, 30, is a dancer, singer/song-writer, and athlete. She is the founder and director of Soca Fusion, a dance and wellness company operating out of the Cambridge and Greater Boston areas. Between her many pursuits, she rarely stops moving.

In 2020, Ella began to experience an unusual fatigue that bordered on exhaustion. There had been smaller signs of an underlying problem — shortness of breath, lethargy — in previous years, but this new degree of exhaustion was more extreme.

On January 30, 2020, her mother, Julie Matthaei, brought her to a local ER, from where she was transported to another hospital, but it wasn’t until Ella came to Massachusetts General Hospital that she received a diagnosis of Pulmonary veno-occlusive disease (PVOD).

PVOD is a rare, often fatal condition characterized by the blockage of blood vessels that carry oxygen-rich blood from the lungs to the heart. To save her life, Ella was told she would need a double-lung transplant.

She remembers her first meeting with her surgeon, Nathaniel Langer, MD. “He was so calm and gentle in his tone and delivery, that he immediately inspired confidence in me and my two moms,” says Ella. “He explained everything to us — not that I remember all the details — but I do remember feeling, ‘this is going to work.’ At any point in my hospital journey, I could have been terrified of the surgery — I mean, they were replacing both my lungs — but I wasn’t. At no time did I ever feel in danger.”

Ella’s double-lung transplant surgery in 2021 took about six hours and was led by two surgeons — Dr. Langer and Serguei Melnitchouk, MD, MPH — along with an anesthesiologist and a team of nurses. Despite Ella’s fearlessness, double-lung replacement is a complex operation with a high risk of complications: the lungs can fill with fluid; the extreme fatigue post-surgery can be debilitating; the patient’s body can reject the new organs.

But Ella is doing well — she says, ‘amazing’ — almost one-year post-surgery. That she is doing so well is, of course, a tribute to her care team but also to the village that raised and still supports her, and to her own spirit: she has long since learned to dance in the rain.

Ella’s journey back to her active lifestyle, including dancing, took time, but was equally successful. “For the first six months post-surgery, you’re not supposed to lift, push or pull anything over five pounds,” she says. “Yet, I started taking dance classes before the six months were up, and now, a year after the surgery, I’m back to teaching, dancing, singing, strength training, and I even started boxing again!”

Dr. Langer was impressed with Ella’s progress. “… your heart and your new lungs became friends right away. That’s what we want to see,” she remembers him and other doctors saying.

One of the ways life has changed for Ella is that she has become a dedicated fundraiser on behalf of Mass General. She joined Mass General’s BeCause community and on March 12, she and her company, Soca Fusion, hosted A Journey Through — a fundraising night of song, dance, music and food — to benefit the Lung Transplant Assistance Fund at Mass General.

“I am extremely grateful to be here today,” she says. “I am fortunate that my medical expenses were covered by MassHealth and my holistic expenses were and still are covered by family and friends. However, not everyone is as lucky as I am. My goal is to spread awareness about the lung transplant journey and financially support current and future transplant patients.”

Ella could not have been more excited about the event. And it was all the sweeter given the pre-surgery worry she had about the possibility of intubation-induced vocal cord damage. “I was worried that I’d never sing again,” she says. “It turns out my new lungs don’t even need training. I’m back to singing the way I used to and better. I got my vocal range back just by having a fresh set of lungs … I can breathe easy again.”